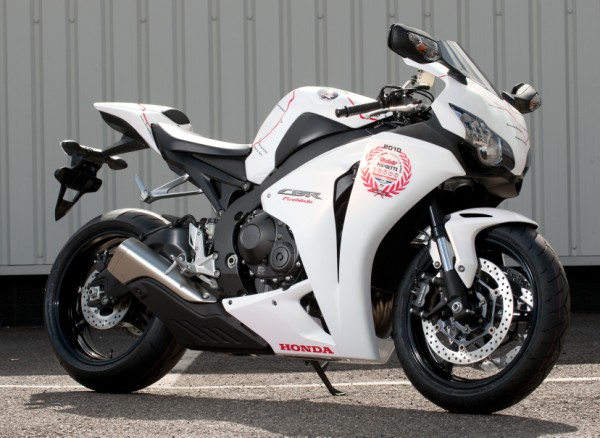 The John McGuinness special-edition makes an ingenious play on the fastest man around the TT course's name. Featuring a beautiful and intricate two tone paint-scheme, the bike is adorned on the fairings and seat cowl with a gold map of the TT course and John's lap record of 131.578mph. Specialist painting techniques were used to achieve the look of dew-drops of condensation and a creamy white head, and as a result no two bikes are exactly the same. Each special edition bike is also autographed by John further enhancing their exclusivity.

Ian Hutchinson tore-up the record books at this year's TT races with an unprecedented five out of five solo wins in the Superbike, Superstock, Senior and two Supersport races. To mark his success on his Padgetts Honda race bikes, the 'Hutchy' CBR1000RR celebrates that amazing feat with a brilliant pearlescent white paint scheme that features a map of the 37.73-mile Isle of Man TT course, outlined around the top of the bike. A red line faithfully follows the twists and turns of the historic mountain course, complete with corner names. Both side fairings of the Fireblade are emblazoned with a commemorative decal illustrating all five of Hutchinson's victories at this year's TT races and, his overall TT Championship victory. There is also Ian's unique 'Hutchy' graphic on the tank, along with his signature.

We recommend to see
Motorcycles
Motorcycles road
Motorcycles city
Send inquiry
Buy
Contact supplier
Your question has been sent successfully
Consultants of the shop typically answer questions during the day.